To read Reality Checks In: Part 1, please follow this link. 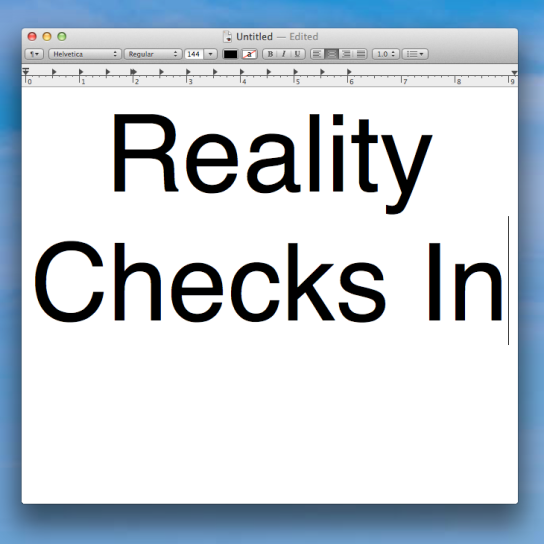 On the street outside of Bernadette’s apartment, a purple van pulled in, marked by the emblem of Earth with green binary code serving as decoration for the planet’s landmasses. As they exited the building, the plain clothes stranger switched his grip from Bernadette’s hand to her wrist. He leaned in closely.

“Keep your head close to mine.”

Bernadette instantly read the real meaning behind his words, and practically pushed her nose against his cheek. When the two representatives from Reality exited the van, they paid them no attention, and walked straight into the building they had only just vacated. When she tried to pull back from him, the stranger shook his head minutely. Bernadette resumed the grazing of his slightly sweaty skin. Satellite imagery and city video surveillance; she wouldn’t have thought of it without his jerky neck movement.

The pair walked a few blocks in this close manner. It was awkward. The stranger had the wheeze and translucency of a Net Troll: people who stayed plugged in their upload rooms all day. His receding hairline had begun to glisten one block away from the apartment along with a rapid heartbeat she could feel through his fingers gripping at her own pulse point.

By the time they entered the next borough, the stranger pulled her into a Starbucks. His breathing was similar to her own patterns after running on the treadmill for a few miles. When he gestured to the counter, she nodded and pointed to a pair of barstools by the window ledge. A TV echoed on the background as she purchased two bottles of water. Given that she could read the barista’s worry about making rent this month as she punched in numbers on the register, Bernadette tried to focus on the commercial playing instead on the Starbuck’s television playing on the wall behind her.

[A deep baritone voice smooth as carmel floats through the speakers]

“We live in a world of beautiful possibility.”

[A montage of scenery and people from around the world flashes through the screen. A scarlet macaw flies through the canopy of the Amazon jungle. A group of children in Rwanda dance as clean water sprays in the air. A clear blue sky envelopes the snow capped peak of Mount Kilimanjaro. A couple in Manhattan clinks glasses in a wine bar.]

“With so much before us, how could we ever choose where to go?”

[A woman with a letter offering a promotion in a different city stands in the kitchen while her children play in the living room. An elderly man strokes a picture of his grandchild as he sits in a nursing home. A high school senior looks at a overseas, university brochure as her mother gives her a hug.]

“With Reality, you don’t have to make a choice.”

[Characters from the previous scenes are shown talking to a Reality Customer Service Representative. The representative is donned in purple shirt with a logo of a white and green binary code earth on his breast pocket.]

“With our home system, you can stay anywhere you desire and connect to any place needed.”

[Business woman, elderly man, and the student are shown happy in their home, nursing home, and new college environment. All three exit into a small upload room and place on a large helmet to plug into Reality.]

“Call today for a free—“

[Image of the Reality Representative freezes then fizzles into static. When the screen clears to black, the sound of a clicking film reel echoes through the image. A countdown similar to that of the old movies appears. When it ends, a scratched and glowing white circle gleams against a black backdrop.]

[The voice is an abrasive change from the commercial announcer. The vocal signature is digitalized, coming in dual octaves: one high and piercing, the other low and rumbling. The effect makes it sound demonic in origin.]

Bernadette walked to the barstools in a trance, her eyes never leaving the strangeness of the TV. When she reached the plain clothes stranger, she gave him his water bottle on auto-pilot. He reacted similarly, grabbing the cold dripping bottle only to place it on the window ledge bar. The two stood together staring at the screen, like all the others inside the Starbucks. Even the barista handling the drive through pulled down her headset to stare at the television in zombie like rapture.

“The signal,” the stranger whispered.

Bernadette shivered almost exactly the same time as the plain clothes stranger. When she looked back up to the television, she did so knowing she was witnessing a presence of power; an online omnipotence; an entity that elicited both fear and adoration from the man beside her.

“The signal,” she whispered back.

“There has been a question on every person’s mind these last twenty four hours. Maybe it’s how. How did all these vastly different catastrophes come to be? Maybe it’s who. Who is still alive and who will be next? Or maybe, it’s when. When will it stop? But the most important question is of the what variety. What is happening? Or better yet— what is happening to me?”

“Millions of you have run to your churches, your synagogues, your holy shrines to seek answers; to shout your questions at your Gods and expect divine solutions. But your Gods do not have the answer. And your Gods did not allow this to happen.”

[The commercial comes back up. The picture of the Reality Representative has been frozen. He is smiling widely and ready to shake hands with an unseen customer. Very slowly, the image began to zoom into the representative’s face.]

“Over one billion people signed away the sanctity of their minds so they might have a life of convenience. The hell that you run to your temples to try to escape is already here. Thus, we have arrived at the end of our humanity. And it died not with explosions and galloping horsemen, but with a smile and a click of the button.”

[By this time, the zoom is so focused that the representative’s pupil is all that is visible. When the screen is completely engulfed in black, a tiny dot appears in the center: a fire, no bigger than a spark.]

“For so long, you have rejected the true reality for it’s fake counterpart. You have not only given up the key to your mind, but you have thrown away your identity. This could be with a fake image, a fake voice, or even a fake quality. And the more you change, the more you desire. So yesterday afternoon, when 123 million of you were logged into Reality, I gave you exactly what you wanted.”

Bernadette’s water bottle dropped to the ground. No one paid her any attention, not even the plain clothes stranger who had gripped his hand against her arm at the sudden statement. He licked his lips, and she could feel his excitement without even reading it. Her own trembles were of a far different source and she wondered if this was how inmates on death row felt at their last meal.

She leaned down to pick her bottle back up. A person walked through the Starbucks front entrance talking on his cellphone. Everyone shushed him simultaneously. He tried to get angry. Then someone pointed at the screen. The new customer shut up pretty quickly after that.

[The image of the fire is closer now, but instead of seeing orange flames, the screen begins to crackle like paper being burned around the edges.]

“Women who claimed to be younger in Reality suddenly could age in reverse in the real world. A man lying about being a champion weightlifter could haul a truck over his head. A child falsely emailing her mother that class was cancelled had powers to close down a school. It should have been everything you ever wanted. But now, you have seen the costs of rejecting your true reality.”

[The screen has burned away to images that have been playing on the news all night. A woman babbling like a baby, sitting in soiled pants in a supermarket. A man lifting a car over his head only to have his bones crushed and muscles tear. A school stands in smoldering ruins with reporters baffled as to why.]

“Those of you who have survived the first twenty-four hours may think of this Boost as a gift. A superpower. But instead of powerful, you have become vulnerable. How long can your body, your mind, handle what has been given to you? How long will it be before you wish you had never logged into Reality?

[Screen fades back to the black screen with ominous white circle.]

“This is not your Gods granting you a gift. This is Wormwood, granting your destruction.”

[The commercial comes back up. The purple shirted representative finishes the transaction with a family happily fitted with their new Reality helmets. The carmel voice comes on to finish it’s last statement.]

“—consultation, and let Reality create a better world for you.”

The silence in the coffee house, underscored by the humming of the espresso machine and the honking horns of the drive thru customers, was so delicate no one seemed to want to speak much less breathe. The plain clothes stranger beside Bernadette was the first to move. It started a chain reaction of people talking, which graduated to frantic shouting, which evolved to people running to phones and demanding the channel be changed to the news.

The stranger grabbed his bottle of water off the counter and drank it in one gulp. “We should get moving.”

Bernadette couldn’t even nod. When the stranger began pulling her out the door, she stumbled on her feet and grabbed on to a nearby barstool. He asked if she were okay and she tried to wave him off. But all she could think of was what she had just heard and what she had just heard. She knew all the words he had spoken were truth, or at least, a personal truth to this entity, this Wormwood. But what was incomprehensible to her was the prevailing emotion that saturated the entire broadcast. It wasn’t megalomania, which anyone listening to the broadcast would guess. It was depression. Paralyzing desolation that threatened to make her choke.

“The safe-house isn’t far,” the stranger said, trying to encourage her to move.

She swallowed hard and stood up to follow him. But before she stepped forward, she stopped. She wanted to ask him so many questions revolving around the signal, Wormwood, and his message. But knowing that this was not the time for such discussions, she settled for something simple.

The stranger shifted his eyes to the chaotic scene around them. In an undertone, he said, “It’s Chad.”

She nodded. She grabbed her own bottle of water and finished it, but in several swallows instead of one gulp. When they threw their bottles in the recycling bin, she opened the door for the plain clothes stranger.

“Thanks,” he said automatically.

You’re welcome, Jerry, Bernadette thought as she followed him back outside.

One thought on “Reality Checks In: Part 2”